I’ve finally gotten around to uploading some photos from this summer. 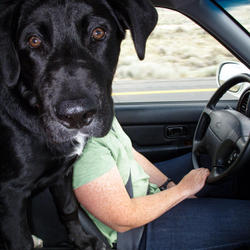 There are a few new albums that I’ve posted, including photos from Michigan, Tahoe and our Idaho road trip.

You can see the photos here:

A collection of photos from the Nichols Arboretum

Some Dylan photos from a hike around Tahoe Donner

And finally, an album of pics from our road trip to Idaho

Great mention in Wired magazine about Better Place (the company founded by Shai Agasi, that I initially pointed to here) starting a pilot program in Tokyo for their all-electric vehicles.

I really like the concept of removable battery packs – akin to filling up your car with fuel, as you do today – as a way to expedite the move to electric.  I also love the idea of electric city cars – perhaps best represented by the Taxi.

I hope that this takes off and I hope we see more of this in the very near future.

I’ve lived in my apartment for 4 1/2 years now and recently, things have started to get a little more crowded (filed under girlfriend, cross-referenced with dog).  Actually, there are many apartments in my building with a larger occupancy than mine (including the upstairs neighbors – 2 adults & 2 kids) so it’s not all that bad – at all.

But, being Americans, it’s in our nature to covet more.

I decided to just see what our options are, and to contact my real estate agent who helped me with my current place and I was really shocked by the change in the landscape.

Now, I know all about what’s been going on in the world for the last year, so it’s not that this comes out of the blue.  What I didn’t appreciate was how much it changed the whole dynamics of home buying.  See, when I bought my apartment, I was able to do so with a very sketchy loan scenario in many ways:

In many ways I played it much safer than what was being offered – I took the 7 year ARM, I bought a cheaper place, and importantly, I’ve always made larger payments than called for, refusing to pay only the interest portion of my loan.

So while I figured things would have tightened up in the past couple of years, I underestimated by just how much.

Talking to my real estate agent (and followed up by my mortgage broker) the scenario today is much more straightforward: put 20% down.  Anything less requires mortgage insurance.

What I wasn’t expecting was a big hunk of cash being needed.

I see where this makes sense: this puts a LOT more risk into the hands of the borrowers.  If my apartment were worth 500,000 (it’s not), that would mean that when I bought, I would have had to put out 25,000 as a down payment.  If I default on my loan and walk, I’m out 25000.  With 20% down, that number changes to 100,000 – something I’d be a lot less likely to walk away from (and if I did, I’d feel a much worse sting).  Also, if the bank were forced to sell that property at a loss, there’s a much smaller risk that they’d lose significant value – since they’d be able to sell it at 80% of its value without losing a cent (since I would have already lost the first 20% of value).

This makes total sense from an industry that’s reeling from too much risk exposure.  But it’s really tough for folks like me who hadn’t really thought about the need to save up a 20% down payment.  It also really hurts sellers (or potential sellers) who won’t benefit from the same number of potential buyers.  No wonder we’re just not seeing that many for sales these days.

So, a little furniture rearranging, maybe a little paint here and there, and my apartment should be good for a little while longer.

Today Canon introduced the Powershot G11 – the successor to the G10 (which I own and like very much).

I have been a big fan of the Canon G- series of cameras and the G11 looks to be an awesome addition to the lineup.  In a bit of a surprise, they’ve reduced the megapixel count from 14.4MP in the G10 to 10MP in this new G11.  This is an excellent decision – realizing that 10MP is more than enough to suit the needs of what most people are using the camera for.  In place of all of those megapixels, they’ve improved the overall image sensor’s sensitivity, allowing for better images in more difficult lighting situations.  From the press release:

The G11 is equipped to deal with any light condition.  Low Light mode enables photographers to shoot up to ISO 12,800 in reduced 2.5MP resolution, whilst a built-in Neutral Density (ND) filter decreases light levels by 3 stops allowing creative control in bright conditions.

My biggest gripe with the G10 is it’s inability (like most smaller form-factor cameras) to capture decent quality images at low light.  The camera is useless at around ISO400.  I Would love to be able to realistically use ISO800 with this camera.  ISO 12,800 is nice and all but not if the pictures are going to be blue.  The idea of dynamically reducing the megapixel count to better render the scene is interesting.  We’ll see once the hands-on reviews start coming in how this all works in practice.

I doubt that I’ll upgrade to this camera – it will be difficult to justify the cost of the upgrade just for improved low-light imagery – but I’ll be keeping my eyes on the reviews for sure.

Regardless of whether I get this camera, it shows that the camera makers are headed in the right direction (no more are we fighting the megapixel wars!) and this should signal similar changes throughout multiple camera lines.

I have previously written about scams originating from Nigeria, and how I’m amazed that these have enough of a success rate to prove to be profitable.

In that post, I also pointed to a This American Life podcast in which a few people who take it upon themselves to fight back were interviewed.  I thought, as usual, that the interview was excellent and I was a little in awe at these people who spent so much of their own effort to throw the scammers off and waste their time.

Lo and behold, in some random browsing a few months ago I stumbled on this page from a former co-worker Ben.  Ben is a pretty funny guy and this is right in line with his sense of humor.  I absolutely love these.  Way to go Ben.

You really need to click through a few of these to fully appreciate the effort that Ben has gone into.   It’s well worth the time to read through these.  It will be one of the funnier things you do this week, I guarantee.

This past weekend I finished up a rather tedious project of digitizing the few DVDs that I own.  The reason for this project was to clear up more space in the apartment and to make the films more convenient to watch.

By this point I think most people have done this with their CD collections, importing them into – well, let’s face it – into iTunes.  Does anyone really use any other media organizer? (OK… I admit, Songbird is pretty awesome, but if you’re syncing an ipod iTunes still feels like the way to go.)

So while most of us have converted to digital music, there are still lots of DVDs hanging around.  This is in part because of the film industry’s successful attempts to block DVD copying software but it’s also admittedly because most people don’t really desire the same convenience from their films as from their music.

The allure for me was realized recently on a domestic flight with no programmed entertainment – no movie on a 5 hour flight?!  Sure, I had my iPod with me and I listened to podcasts and music, but as long as I had my laptop with me, I might as well watch a movie on the bigger screen.  Unfortunately, I didn’t have any DVDs with me and even if I did, the DVD drive spinning would chew up the battery.

I used a few programs on my Mac to record the DVDs into a reasonably-sized file that sits on my disc.  It was a pretty simple process really (once the right software was installed – including VLC media player, Handbrake copying software and MetaX data tagger).

All of my DVDs (and really, we’re only talking about maybe 30 or so) are now in a cardboard box where I can place them next to my CDs and forget about them.  The files on the other hand can be managed through iTunes and synced with my AppleTV so I can watch them on my TV, on my laptop or even on my iPhone (Though I don’t see that happening any time soon).