I was really hoping this year to make a couple of upgrades to my cameras.  Unfortunately, the manufacturers weren’t playing along.

The Point & Shoot is the camera that’s always with me and is great for quick snapshots.  This was long ago replaced by my cell phone and I don’t see this changing.

When I think about a compact camera, what I’m looking for is more control than a simple point & shoot but in a smaller size than a hefty SLR.  These are great for traveling, around town, and as a second option when I do have my SLR with me.

Traditionally I’ve used the Canon G-series cameras for this and I’ve been pretty pleased.  The current iterations are the Canon G12 and Nikon’s P7000.  My older Canon G10 has a nasty smudge across the lens which I haven’t been able to remove so it hasn’t seen the light of day for quite a while.

This year I was really interested in trying out the newer Micro 4/3rds form factor to fill this spot but I wasn’t happy with any of the camera releases.  My ideal camera in this range would be a newer Olympus EP2 (EP3?) with better high-ISO capabilities, better connectivity options (as in, wifi), and a built-in flash.  According to the rumors sites, there is a new Olympus on the way that somewhat fits this request, but it’s based on the EPL-1 which is a more consumer-orinted camera, with a slightly poorer interface for advanced functionality. Unfortunately, this seems to be the market that the 4/3rds are trending towards which I think is a shame.  I really think there’s a market for enthusiasts/pro-sumers who want a smaller form factor than the traditional 35mm SLR but with similar controls.

The biggest disappointment this year has been in the SLR range.  Nikon introduced 2 new SLRs this year, both in their consumer line.  Last year they also released 2 new consumer SLRs as well as a new professional level camera but only a small revision to their enthusiast line.  They are long overdue for an update to their D700 camera (introduced in July 2008).  This is the camera I have been waiting for!  In this form factor I’m really interested in the better high-ISO performance as well as video.  I’m really looking forward to spending a little more time in 2011 working in video.

Early indicators are that Olympus should be making announcements in January about their next releases (at CES) and if they don’t deliver perhaps Samsung will provide.  Rumors are also beginning to stir that the D700 replacement (D800?) could be announced in the 1st half of 2011.

Here’s to hoping they match what I’m looking for.

I’m getting around to uploading photos from our trip to Greece.

The first batch is from the beginning of our trip – around the Southern coast of Crete. 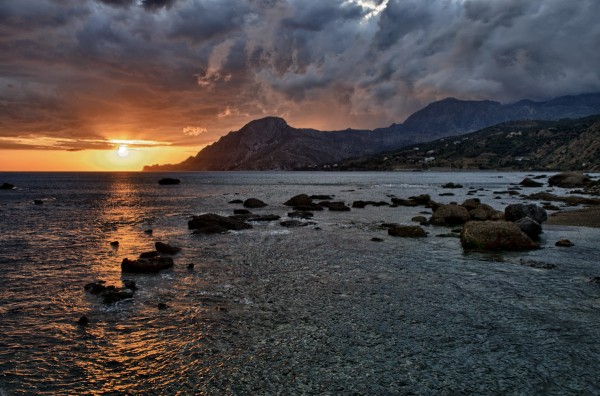 This photo was taken during our stay in Plakias, a small touristy town surrounded by a nice large bay on one side and mountains on the other.

We saw a few rain showers during our stay in Plakias but all in all the weather was really nice – warm enough to swim but cool enough to enjoy walking around.  More often than not, storm clouds like this would just threaten without really producing any rain.

In the coming days I’ll be posting pics from the rest of our trip including Northern Crete and Athens.