I´m in Torres Del Paine park in Chile trekking through incredible terrain.  On this night I´m at one of the fancier ´refugios´ in the park, so they even have internet access.

I wanted to quickly check-in with email to make sure that everything´s OK at home and I  had to buy 30 minutes of time, so I figured I´d write a quick note.

This park is really amazing.  The Refugios are just what they should be (though this one is a little over the top): simple rest stops for the weary hiker.  A bed, a beer, a dinner, and a warm atmosphere.  We really need more hut-to-hut options in the states.

The scenery has been fantastic.  I look forward to downloading my photos onto a computer so that I can check them out on a big screen.

Looking forward to the next few days of trekking and checking out glaciers before heading back to civilization. 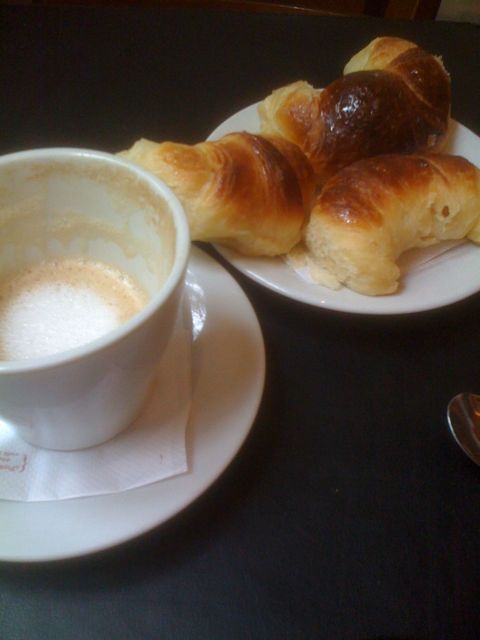 One has to love a city with a strong cafe culture. It’s great to know that around just about any corner is a place to sit, re-group, watch the locals, and enjoy a good coffee.

Such is the case in Buenos Aires.

I’m sitting here along one of the many boulevards, drinking this coffee while overhearing all of this Spanish dialogue that I wish I could comprehend. Oh well, it’s still entertaining to watch.

I have so much crap it’s really not funny.  When it comes to travel & outdoor gear, I can’t resist the American consumerist in me.  But with this trip to Buenos Aires and Patagonia, as with most, there’s the additional question of what camera equipment to bring.

Were I only going to Buenos Aires (or, put another way, if this were a more ‘urban’ trip) I would bring my digital SLR, a good ‘standard’ zoom lens and a smaller ‘walk-around’ lens.  With my current equipment, that equates to the Nikon D300, the Nikon 17-55 f/2.8 zoom and the Nikon 20mm f/2.8.  That would allow me to have good general coverage with the zoom lens with the added benefit of a smaller form-factor for walking around a little less conspicuously.  I would probably consider leaving the 20mm lens behind and just use a smaller pocket camera for when I want to carry around a lighter load.

Which leads me to the next piece of gear – a walk-around pocket camera.  For this I currently use the Canon G10.  It’s not quite pants pocket-sized but it will go in a coat pocket without a problem and it affords me more control over the shots than something truly pocketable.  This is also a handy camera for shooting short videos.  I’m glad to see SLRs including video capabilities these days as moving pictures (and sound!) adds a nice dimension to looking through old trips.

Since this trip includes a visit to Torres del Paine, the situation becomes a little more challenging as that scenery provides for a more diverse set of shooting conditions.  Among the decisions are: whether to take the 70-200 f/2.8 or the 80-400 4/f-5.6 and whether to take the tripod or just rely on the monopod, as well as power considerations and whether I want any specialty lenses like a macro, etc.,

The 80-400 has a great zoom range (especially on the DX Nikon body where it gives me an effective focal length of 600mm).  This is the lens I took to Africa and I was very pleased with its performance and the shots I was able to get with it.  But, ultimately, I think I’ll go with the 70-200 for this trip.  It’s slightly smaller, has a wider, stable minimum aperture, and the optics are slightly better.

Normally for traveling I rely on a monopod since it’s lighter, easier to walk around with, and offers basic stabilization.  For this trip however, I’m going to go with the tripod.  I’m hoping for some great scenic shots and for those (especially when looking to make large size prints) the monopod really doesn’t stand up to the tripod.  (This would be less of an issue of course if I had a nice carbon fiber tripod).

Other equipment I considered, but am leaving behind includes my flash and my 105mm macro lens (even though this is my favorite lens).  I need to cut down on the weight somewhere, and this is where I’ll draw the line.

Since I’ll be spending some time in the backcountry, I’ll be bringing along my portable storage device, which will allow me to offload images from the memory cards, freeing up more space.  In the future I just need to buy more memory cards since they’re so cheap and lightweight, but since I already own the hard disk, I’ll just bring that.

And other odds and ends which will travel with me: a lens cleaning kit; battery chargers and extra batteries; cable release; assorted cases and weather protection; polarizer & graduated neutral density filters; memory cards.

I think this is the right setup but here are my concerns:

First and foremost, I don’t know what to expect in terms of being able to charge batteries while in Patagonia.  I have only 2 batteries for my SLR and with cold conditions, they might not last.

Second, I’m bringing only 1 camera body.  In the past I would have brought a second body (either film or digital) but I’ve never NEEDED one and I want to cut down the weight somehow.  I hope this is not the trip where my camera body decides to give up the ghost.

In a pinch I might decide to bring my older Nikon D70 (and associated batteries, charger) and leave the 20mm lens behind.. we’ll see.