After some more filtering, developing, and writing, I’ve posted some more photos from the great African adventure..   Africa Photos.

In this latest update, I’ve covered our trip to Victoria Falls, our safari experience in Botswana, and our respite in Tanzania.

Still to come (shortly) are the photos from Rwanda and our day trip to London.

I’ve mentioned several sites from folks that I’ve worked with over the past years but I’ve also managed to meet some others (some of whom are actually outside of the computer development world <gasp> ) who have created or maintain websites.

Geoff is one of those guys.  I first met Geoff in Joshua Tree on a rock climbing trip and while Geoff didn’t work in the computer field he was still quite the geek.  You see, the reason we met up with Geoff was because of a rock climbing online group rec.climbing (for the record, I was not a member of this group but other friends of mine were).

We soon had several climbing trips together and Geoff, as such an easy going guy, fit in easily with our group (and just about every other climbing group out there).   But as my climbing started to wane, I saw less and less of Geoff.  But he was an early adopter of the internet and had early on created a site not unlike mine to allow people to keep up with his adventures.

These adventures included finding the right woman and getting married, which triggered a name change and design change for his site (sadly, gone was his use of his nickname Texas Kilonewton – a funny climbing/physics reference).  I’ve enjoyed keeping up with Geoff’s experiences although recently they seem to be taking a turn for the more gnarly with some broken ribs and a nasty sounding spider bite.

I think this site is a good example of a personal site, which does a good job of keeping friends and family up-to-date with what they’re up to.  In addition there’s always some cool photos and stories and I think the layout is done pretty well..  This is something that I appreciate as I too have fooled around over the years with how to maintain my own site (or sites… which are starting to feel a bit of a mess..)

I recognize that this site may not be particurlarly exciting to those who don’t know Geoff, but on the other hand, if you’re looking for some information and stories from international traveling or kayaking around California, then this site does provide a fun diversion on those lazy Friday afternoons.

With all of this free time on my hands I’m finally getting to all of those random small tasks that I hated doing on my precious weekends.

Today I finally replaced the plastic underbody protector on my car (ripped off earlier this year while in the snow) which of course required not only pulling the car out of my parking space, crawling underneath and figuring out which socket would be needed – but of course, a trip to the store to pick up a few bolts… and of course the first TWO stores I tried didn’t have them (and how is it that I keep going back to Kragen?).  It’s crap like this that I just don’t want to spend my time doing when I’ve got a full time job going.

Well, after helping Meghan move, our consolidated coin piles ended up on my list of things to get rid of.  I poked around a little online and lo and behold – Coinstar (at select locations) will let you trade in your coins without the normal 8% (or greater) skim off the top.  The catch?  You need to trade it in for a gift certificate rather than cold hard cash.  But, the list of vendors is pretty reasonable and after 15 minutes at the machine I found myself with a $63 redemption code for Amazon.com.  Not too bad..

Well, it’s taken me a month or so (then again, I’ve had a busy month…) to get through the Africa photos but I’m finally starting to post them online.  I’ll trickle them onto the site over the next couple of days.  Check here for the latest..

There have been a few reasons that it’s taken me a while to get these photos online.

First of all, I really have been busy, Hiking in the Sierra for a couple of days, moving Meghan into her new apartment, heading to the East Coast for a couple of weeks, and finally settling into San Francisco again.

Second, I’ve been exploring other ways to display my photos, including playing around with iMovie on the Mac (a product I’m pretty impressed with – it definitely has its limitations but it exceeds expectations for a free application) and other online sites.  In this case, Flickr really has the stronghold on photo sharing.

Third, I am supposed to be looking for a job…

Yesterday Meghan and I got up early and hauled down through the fog and cold weather to Monterrey to watch the Moto GP race at Laguna Seca.

Now I am not a big fan of racing.. I can’t imagine going to a Nascar race, I’ve never bothered to check out the San Jose Grand Prix race but I do enjoy the Tour De France and I loved the San Francisco Grand Prix and attended the few of those that there were.

But the Moto GP race is something to be seen.  The way these guys control these motorcycles on this track is incredible.

We arrived as some qualifying races were going on and spent the next few hours wandering around the grounds, checking out the vendors’ booths, and watching some other motorcycle races as they occured.  The main event started at 2:00 and we hiked up the hill to see the warm-up lap and race start before heading to the back side to check out the best view in the house – the corkscrew.  This section of the track is hugely popular with the crowds and this weekend’s race showed why – there were several exciting events including an incredible pass from the two bikes fighting for the lead (Casey Stoner and Valentino Rossi). 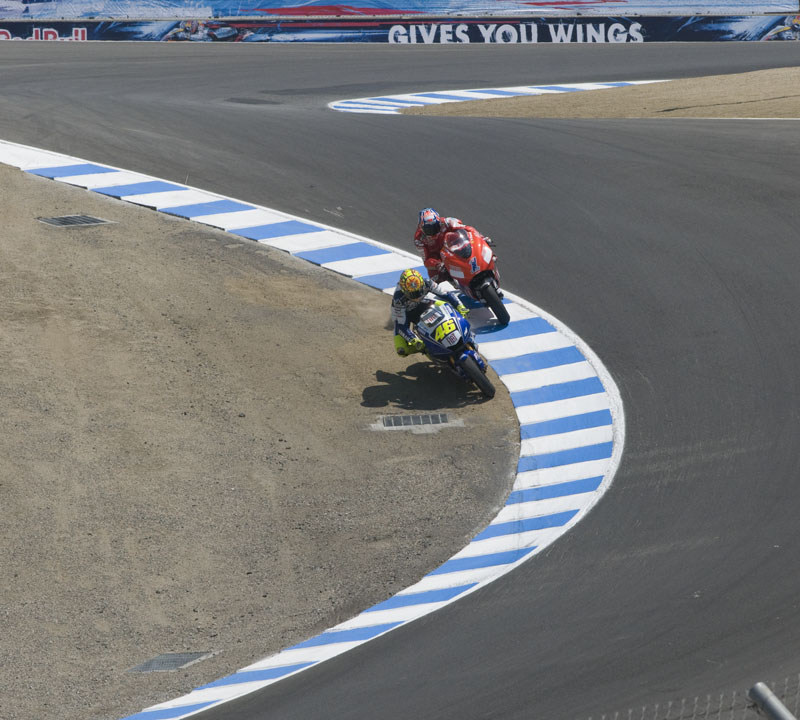 We continued along the track, watching the race from different vantage points until Rossi finally took the checkered flag.

I look forward to next year’s race already.  And at some point I’ll post more photos, but first I have to get through the Africa photos!

When I think about it, I’m pretty amazed by the number of people from Intuit that I worked with that have gone on to do other things.  I’ve already mentioned my friend Ed who left to start his own business.  I had dinner with him the other night and he’s doing really well – the site continues to grow and he continues to improve its content and functionality.

I also have friends who have left the computer world altogether to persue other avenues.  One focuses a lot of her time volunteering and trying to enact change in her community, another is making a go of a new career helping others figure out their life’s path.

Another ex-Intuit friend of mine, Jim, is about to start his second life as an architect – he starts school in the fall – as a Sophmore – with an MBA.  I bet he’s the only one in his class with one – including the professors – some of whom just may be younger than him.

Before Jim left the computer world, he decided he wanted to know a little more about it.  So he re-architected his personal site using a completely home-grown publishing system, not all too dissimilar from the one I use to publish this site (though mine I just had to download and install..).  After he figured that out, he decided to build another site – one which I think is a good idea, but one which he is no longer maintaining.

The site is called VegiVeg and it’s a place where vegetarians could research their favorite foods and make sure that they’re not accidentally ingesting anything which they’re trying to avoid.  It’s a site that relies on user-generated content, making it a perfect “web 2.0” interactive space.  Unfortunately, it also requires some number of dedicated users to get the ball rolling and Jim lost interest before they did.

Still, I admire the idea, the follow-through, and the ability of someone to take an idea from inception through all the way to a launch, whether it be a web site, an art project, a career move, or other life-change.  So many people can come up with an idea – but it’s those that have the ability to follow through that I really admire.